As you probably know I’m a cofounder and User Interface Designer at Intense Debate. We just released a big update to our revolutionary commenting system, that’s basically a total makeover graphically. I think you can tell that I’m excited! 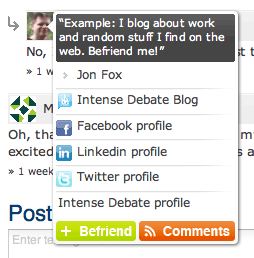 One of the most noticable changes/improvements is the “User Information Box” that displays when you hover an avatar. It’s almost like a mini-profile-mashup from alot of different things. The idea is that it should tell you alot about the person you’re interested in, and still look OK if the person has not supplied much data. A screenshot of this new feature is next to this paragraph.

There’s much more to this update, if you’re interested I suggest you go read (and subscribe!) to our company blog: Inside the Debate.